14 june celebrates RUG 400 years University in Groningen. From 19.00 until 20.30 the PARADE is moving through the centre of Groningen. A programm is handed out. My contribution to the PARADE: Victorymarch ‘Feeling home in your neighbourhood’. My project is described in the programm: Students and Groningers move a house, it is their house . They show how they want to live sustainable together. You see a green, sociaal, sportive, partying and communicating society where is place for everybody. You may ask yourself, do you feel comfortable in your neighbourhood and what do you think…..

Communication about Victorymarch ‘Feeling home in your neighbourhood’

Students and ‘stadjers’ at work

An interview on our project is published in the Magazine for alumni and relations: Broerstraat 5, University of Groningen.  Gea, Hans en Lennart have been interviewed. 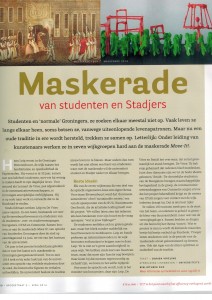 The university of Groningen is celebrating her 400th anniversary. To celebrate the anniversary a Parade is organized.  Seven artist will make an mobile art object together with 3 fraternities and 1 neighbourhood. With the mobile art object the 4 groups show what is going on in the city in relation to the theme’s of the university (healthy aging, sunstainable energy and sunstainable society). I am one of the seven artists. I work together with the students of the fraternities GYAS, Commotie, Navigators en the neighbourhood De Rivierenbuurt. We made allready a concept for the mobile artwork that will be shown in the Parade. During the next months we work on it. De Parade starts at 19.15 at the Ossenmarkt. We walk together the following route: Ossenmarkt, Lopendediep, Kijk in ‘t Jatbrug, Oude Kijk in ‘t Jatstraat, Stoelstraaierstraat, Akerkhof, Munnikeholm, Gedempte Zuiderdiep, Oosterstraat, Grote Markt, Kwinkenplein, Oude Ebbingestraat, Spilsluizen and back to the Ossenmarkt.

The Maskerade is an old lustrum tradition where costumed students, symbolizing historical figures and story’s,  walked in procession through the city of Groningen. 100 year ago the last Maskerade took place. Move it is a contemporary maskerade!